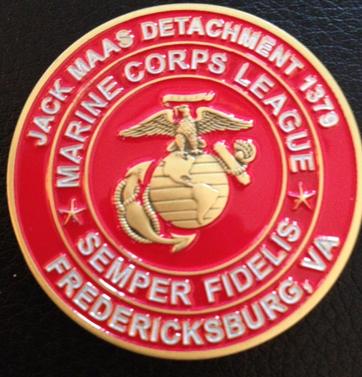 Detachment Marine of the year

The only required uniform item is the MCL Cover with emblem.  No attachments such as pins, miniature medals, etc are authorized on the cover.

The Detachment has created a red short and long sleeve shirt identifying the wearer as a Detachment Member. Shirts are available from the "Ships Store" open at Detachment Meetings. Other items are baseball caps, red windbreaker jacket, challenge coins, detachment decals, etc.

Membership approved a policy that states  when participating as a Detachment member in a public event that BOTH the cover and Detachment shirt be worn with appropriate trousers and shoes.

​Detachment policy is that store items items purchased by members are paid for when received by the member.

​Detachment Meetings  are held at the Moose Family Center 1655

​3d Saturday of the month

ALL DATES AND LOCATIONS SUBJECT TO CHANGE BASED ON COVID RESTRICTIONS

Pre-Meeting Breakfast starts at 0900 and are noted by * (Subject to Change!)

To join the detachment, all that is needed is your DD 214 and the annual dues of $35.  Your DD 214 will be reviewed and returned to you; we do not make a copy or retain a copy for our records.

​Just come to one of our meetings and we will begin the process.  We will be glad to have you as a member.

Jack Maas Detachment is the fastest growing unit the the Dept of VA!

The Detachment has a primary goal of providing of assistance to Marines and veterans of other services who are in need.  This assistance is provided from fund drives conducted by the Detachment.

​Financial  support for the Detachment's charities are the "Rose Fund" drives held on/near Memorial Day and Veteran's Day each year.

​The Detachment is able to provide veterans with immediate financial help up to $500 based on a demonstrated need.  This policy is chaired by the Sr. Vice Commandant George Firehammer. 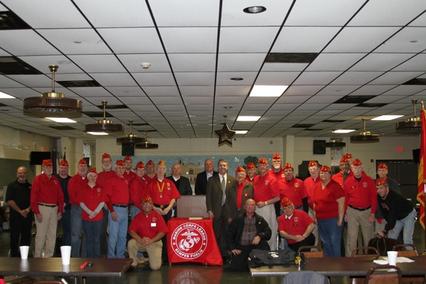 Provided the vision and legwork to establish the Detachment

​Do you know the actual founding date for the US Marine Corps?  It might surprise        you!

​​Historically, the Marine Corps dates back to the founding of the ​Continental Marines  in Tun Tavern on that date.

​However,​ the founding of the United States Marine Corps dates to the Navy Act of 1798. Our Corps uses the historical  date 0f Nov 10, 1775

THE DETACHMENT NEWSLETTER, "SEMPER CERTIOR" IS AVAILABLE TO INTERESTED PARTIES AND DESCRIBES THE ACTIVITIES OF THE DETACHMENT.   PROSPECIVE MEMBERS MAY REQUEST A COPY OF THE CURRENT NEWSLETTER BY EMAIL TO:   jackmaasdetachment@gmail.com.  The newsletter will be sent to you by email; please provide a valid email address

Resumption of this lunch group meeting was re-started with the Feb 2021 luncheon at the Great American Buffet located in Central Park from 1100 to 1300 on the 1st Tues of the month.

On display at the May Detachment meeting, was a US Flag that was rescued from the Pentagon following the 9-11 attack.  The flag is in pretty good shape except for stains.  By member decision, this flag will be on display along with our regular detachment flags (US and MCL).

Official MCL policy in this area may be seen in the National By Laws and Admin Procedures.

Detachment Challenge Coins available at meetings for $10 each.  See Quartermaster to purchase.

The Detachment is greatful to Marine Craig Ford for the design and initial funding for this project.

From the Webmasters Personal Library and Worth Reading:

"Uncommon Valor" by Martha Maccallum. The story of a Marine uncle; a casualty at Iwo Jima

"You Are Worth It" by Kyle Carpenter, Cpl USMC (RET) Medal of Honor recipient.

​"Into the Fire" by Dakota Meyer, Sgt, USMC, Medal of Honor Recipient.

"Shadow of the Sword" by Jeremiah Workman, SSgt, USMC (ret), nominated for the Medal of Honor which was reduced to a Navy Cross

"Outpost" by Jake Tapper.  Events leading up to attack on an Army outpost by the Taliban and the awarding of 2 Medals of Honor for action in a single combat event.

There is currently is a movie depicting this event and has been released DVD. One of the recipients of the Medal of Honor, SSGT Clint Romesha has also a book out on this action entitled "Red Platoon".

​"A Quiet Cadence" by Mark Treanor, a novel of Vietnam.  Treanor, a Naval Academy Graduate and a Marine Rifle Plt Commander in RVN.

A Detachment hybrid meeting was held on Sat, 3/20/21 at the American Legion Post 55, Fredericksburg, VA.  Meetings in person resumed in Feb 2021.

Other Detachment Business: Plans in process for celebrating 10th detachment anniversary; Dept of VA Convention Apr 30 to May 1 in Richmond; Membership in detachment is 2d largest in VA (James Slay Det in Richmond is #1); Nominations for elected office held

Welcome to the Jack Maas Detachment 1379

​The Detachment is named after the late John  (Jack) B. Maas Jr., Colonel, US Marine Corps (Ret), a World War II and Korean War ace.  The Detachment is also extremely grateful to the Maas family  for their permission to name the Detachment after Colonel Maas and for their very generous financial support.

Colonel Maas entered the Marine Corps through the V-5 Program and attended flight school at NAS Pensacola.  Designated Naval Aviator 11015 and commissioned a 2d Lieutenant USMCR on 9 Jan 1942. He was credited with 4 aerial victories with VMF 112 at Guadalcanal and with 1.5 at Okinawa in 1945.  Several command and staff assignments occurred during and following WW II and Kora.  Colonel Maas retired on 28 June 1968 at Norfolk, VA.

Colonel Maas' personal decorations include 3 awards of the DFC, a Bronze Star with combat V, and 8 single mission awards of the Air Medal.

Post retirement, Colonel Maas managed Shannon Airport in Fredricksburg, VA from 1968 to 1977 and served as Executive Director of the Marine Corps Aviation Association from 1977 to 1987.

Colonel Maas died on 7 Aug 2005 and is buried at Quantico National Cemetery.  At the time of his death, he was survived by his wife Natalie and four children.  Natalie Maas died in 2012 and lies at rest next to her husband.